Dan’s family moved from Ohio to Albany, Oregon when he was a boy.  He attended Albany Union High School before joining the Army.  During his time in the service, Dan saw the world- traveling to Germany, Korea, and Japan.  In 1968, after his discharge from the Army, Dan married Teresa Mae Groff and became a father.  The marriage wasn’t a long one, lasting less than four years, but it left Dan with two treasured daughters, and a lifelong fear of commitment.

A gifted storyteller, Dan loved to entertain his daughters, his nieces and nephews, and any other children or adults in his general vicinity.  Those who loved him knew to be ready for constant teasing when Dan was around, and his daughters grew up fluent in the art of playful banter.

“There are three food groups,” he used to say, “Beef, Salt, and Milk!”

Dan loved a good pot roast, and he loved having livestock.  He was always happiest when he had a few head of cattle to care for, and maybe some pigs and chickens too.  His girls have fond memories of going with him to the auction, where he liked to bid on the smallest, skinniest calves.  He would bring those bony critters home in the back seat of his station wagon and nurse them to full strength.  The girls were bottle feeding calves when they were barely tall enough to look them in the eye.

Dan played the guitar most of his life.  He had a lovely singing voice and an impressive repertoire of songs that were both sad and silly at the same time.  He was a man who loved to laugh, and to make others laugh too. A ferocious tease, Dan once said he believed his mother, Mary, lived to the age of 93 in part because his constant joking kept her sharp.

In the late 70’s and early 80’s, Dan traveled around the country, often hitchhiking from state to state, dropping in on family who lived far and wide.  Eventually, he found himself in Jasper, Missouri, on a farm owned by his sister, Rose Ellen, and her husband, Jim Brewer.  Dan fell in love with that land.  He claimed his years on that farm, gardening, raising livestock, and looking after his mother, were the happiest of his life.  He’d found his home in Missouri, and his wandering days were over.  Though he eventually moved off that farm, he never lived far from that spot again.

In 2013, after losing his home in Webb City to a tornado, Dan realized a lifelong dream when he purchased a plot of land of his own.  That land is less than 10 minutes’ drive from the Brewer farm.

Dan was never afraid of hard work.  When he wasn’t working on his own land, he was helping others- doing small repairs, helping to build homes or fences, or mowing the grass at the Brewers’ farm.

He claimed that the best job he ever had was building fences, because he worked every day with his good friends, Marvin and Konrad.  It was hard work in hot, humid weather, but the Gatorade kept them alive, and the laughter helped the time fly by.

In addition to raising livestock and teasing his loved ones, Dan enjoyed fishing and hunting for deer.  He had a vast collection of Westerns by Louis L’Amour and Zane Grey, and he enjoyed Clint Eastwood movies. He always had a dog around the house, and he spoiled them outrageously.  Some of his favorites included Mindy, Buddy, Scruffy, Scraggles, and Molly.

Dan is survived by two daughters, Patti Aro of Seattle Washington and Donna Vodopich, of Bellingham Washington, and four grandchildren- Scarlett and Owen Selden and Mia and Mitch Vodopich.  Also, one brother, James Aro, and a passel of nieces and nephews, great-nieces and great-nephews, as well as other children and adults unrelated to him by blood, who still sing the silly songs he once sang to them, and who still tell the stories he once told to them.

No formal services are planned at this time.  The family requests that memorial contributions be made to your local pet shelter.  We encourage those who loved Dan to celebrate him with stories and laughter, and, of course, the singing of silly songs. 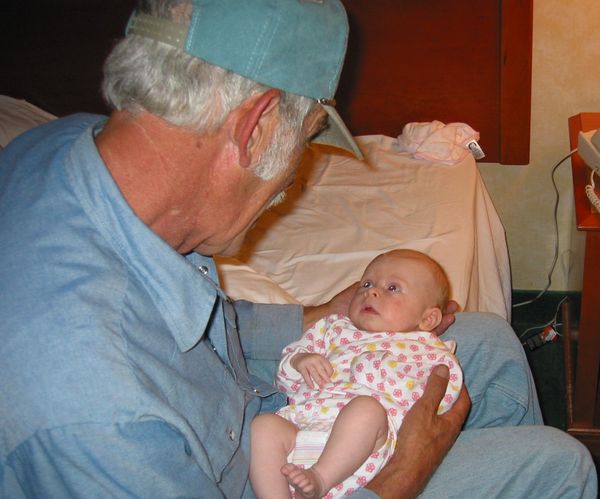 I have always thought my Dad was made for Grandparenthood.