The West Side Highway is eight lanes of blacktop that traces the Western edge of Manhattan along the Hudson River. It is divided down the center by a wide median dressed up with shrubs and spots of grass, punctuated by streetlights leaning over the road at regular intervals. Since the attack on the World Trade Center, it has also been the lifeline to Ground Zero. The southbound lanes are closed somewhere north of 15th St, and the only cars allowed to pass belong to residents of the area and recovery workers. The majority of traffic traveling north is coming directly out of the site.

An ad hoc sort of volunteer effort has been going on in the median of the West Side Highway, where it intersects with Christopher Street some ten blocks South of my office. Every day since the disaster, crowds of people have gathered on that spot to cheer for the recovery workers as they pass to and from the scene, waving flags and holding signs bearing messages of support and gratitude.

Today, on our lunch break, a group of people from the office decided to grab a burger and walk down to Christopher Street. When we arrived, I was surprised how few people there were. In the early days the street was lined, but today there were only ten or twelve determined well-wishers, shifting back and forth across the median, ebbing and flowing with the traffic in either direction. A woman in her fifties was passing out cups of water and salt-water taffy during the breaks in traffic.

We picked through a stack of hand made signs in different shapes and colors. Sifted through cardboard and plastic, laminated construction paper, posterboard and wood to find the sign that suited each of us. The handwriting on each was different, but the sentiment was the same.

Liz looked somber, holding a long piece of cardboard that read “Stay Strong”. Carrie raised a white piece of posterboard with the message “We Love our Heroes”. The “O” in Heroes was shaped like a heart. Julie waved “Honk for USA”, and I traded my “Gracia” in for a piece of blue construction paper, covered in clear tape, that simply read “Thanks”.

The passing traffic responded with cheers of their own. Badged and undercover police cars of every make and model whooped short quips from their sirens, or chorused an assortment of R2D2 style blips and hoots, some briefly flipped on their lights. Taxis and vans, service trucks from the phone companies, recycling services, and welding outfits honked their horns and waved back. Oversized dump trucks traveling north gave us the thumbs up as they passed, the smell of ashy dust and asbestos breezing by in their wake.

Each volunteer had a distinctive cheering style. One woman arrived wearing shorts, sunglasses, and a white shortie tee shirt with the American Flag across the chest. Plucking out a small piece of white laminated paper with which read “God Bless America”, she moved out to the curb and began enthusiastically cheering, waving, and screaming “THANK YOU!! THANK YOU!!”. Many gave the ‘thumbs up’ while waving a sign or flag, others yelled their thanks into the open windows of the passing cars. Michael put down his sign and stood at the curb, composed as the Statue of Liberty, simply clapping.

I held my sign high with one arm, waving enthusiastically with the other. I wanted to call out “Thank you!” with the rest of the volunteers, but I couldn’t get past the lump in my throat. With every honk and wave from the passing cars, my smile grew wider, and my throat tighter. And so I just waved and smiled, while the tears collected in the rim of my sunglasses. 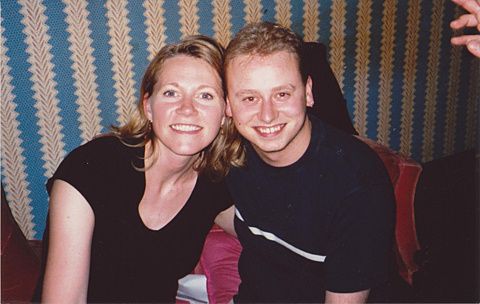