Looking back, I should have seen it much sooner.

I’m walking through the World Trade Center with Elbert. He had just declined my invitation to go to Rockefeller Center for swing dancing on Friday.

“Well,” says Elbert, chuckling, “Does Kris have a little crush on you?”

Inexplicably angry, I glare at him, “No! He’s just more fun than you!”

On a typical Saturday morning, I call you.

“I have plans with Chrystal today.”

How could you have plans that don’t include me?

When I came home from walking Sophie, Rebecca had the news on. Footage of the first plane crashing into the tower. While we watched, the second plane hit. When Rebecca explained that terrorists had hijacked the planes, I was slow to catch on.

“But they let the passengers off, didn’t they?”

We spent the morning emailing people to let them know we were ok. Then we walked over to Julie’s mom’s apartment and spent the rest of the day with them. In the back of my mind an impulse repeated like a heart beat:

It felt instinctive- this urge to leave, to walk to you.

I still wish I had done it.

In October Oxygen was forced to lay off some eighty employees. I was surprised to be among their number. On the day of the layoffs, the people who’d lost their jobs congregated at the nearby bar, The Gaslight. Some people entered the bar bitter. Some were ebullient, carrying their boxed items and joking. I was the sad one. I sat on the corner of the couch with my knees up to my chin and tried not to cry. “I will go home now,” I thought to myself. “I am free to go back to Bellingham.”

Eventually the work day ended, and the people who still had jobs began arriving at the bar. The sun was low in the sky, shining directly into the open doorway. When you walked in, you were a dark cutout of Kris, outlined in sunlight. A man-shaped halo. I realized I had been waiting for you.

You walked directly to me and put your arms around my waist.

“All of your friends are at the Redlight” you said, indicating the bar across the street- another Oxygen hangout. “Would you like to go over there?”

I nodded. I would have followed you anywhere. 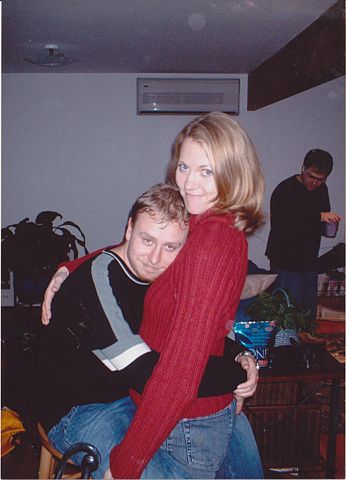 Now I had to decide.