“Don’t forget to take your baby aspirin!” my friend William advises. For a moment I have no idea what he’s talking about. “It will stop your body from rejecting the sperm!”

There was a time when I would have scoffed as this advice. Now, I’ll try anything. Especially, if it’s one of the Four Days.

Ever since we started trying to get pregnant I’ve been two people. For half a month, I am Maybe Mommy. I might be pregnant, so I take all of the usual precautions. I don’t drink my Saturday Mimosa. I stay away from my sinus medication. I am fanatical about taking my vitamins. It is a full dress rehearsal, during which I practice all of the sacrifice and deprivation that I will soon be forced to endure for nine long months- without the fun of shopping for itty bitty socks.

For the Non-Mommy half of the month I act like I have two weeks to live.
“Why, yes, I will have a beer. Better make it two!”

…because they could be my last beers, ever! I run on the treadmill until my lungs bleed, because I know it’s safe to go into oxygen debt. I drink three cups of coffee per day, eat un-pasteurized cheese, and stand in front of microwave ovens. I swallow fistfuls of decongestants with lascivious greed. I’ve considered taking up smoking or shooting heroin, just to make the most of these, the twilight days.
You see, I am learning to dread the experience as much as I am looking forward to it. And who wouldn’t?

When I first imagined getting pregnant, Mommy Me looked a lot like Lucille Ball. Not in the red-haired-false-eyelashes way, but in the way she managed to look cute and helpless and unabashedly jolly when she was enormously pregnant with Desi Arnaz Jr. Lucy made pregnancy the most endearing thing that could possibly happen to a girl. Unfortunately, research indicates that there’s more to the story than Lucy let on.

The eager mother-in-waiting, I have purchased a number of books on pregnancy, including one called, The Girlfriend’s Guide to Pregnancy. Let me just say right now- there are some things you are better off not knowing about until the situation is already upon you. Don’t buy this book until you are already pregnant. Maybe not until your children enter high school.

Once your children are in high school, this book will come in very handy. Especially if your children are girls. This is because the book has a secret alternate title, which is “How to Terrify Your Teenage Daughter into Abstinence”. I don’t know why anyone feels the need to threaten their daughters with AIDS, Herpes, or boys who won’t buy the cow if the milk is free, when there is a treasure house of horrors called pregnancy to scare them with. Here’s something every 14 year old girl should know:

“Stretch marks are lines on your skin that look like runs in your stockings, if you can imagine your breasts, behind, and belly wearing stockings. During pregnancy, they look rather reddish or purplish, but long after the baby is born they will look almost white or silver.”

See THESE, little girl? That’s right. If you have sex, you’ll get them ALL OVER YOUR BODY. And they itch. And glow in the dark. And sometimes they move. When you were just a baby, I had a stretch mark across my face for six whole months! At night, they wriggle around on my skin when I’m trying to sleep. They skitter and scratch like tickly spiders, all night long. Spiders!

That oughta keep the pants on her at least until her mid 20’s.

Not only do I have stretch marks to look forward to, but I can expect to have explosive gas every day for nine months, my nipples might grow hair, and my pubic hair might travel north so far the my belly will resemble my husband’s furry back. I also might get hemorrhoids, which feel something like a bunch of grapes dangling between my nether cheeks, but are really part of my intestines which have been forced out through my anus during the birth process.

That is- if I ever actually do give birth.

Here’s a secret nobody tells teenage girls: Sex doesn’t always lead to pregnancy. I can vouch for this, because I have had unprotected sex with my husband at least 43 times without getting pregnant. I was so shocked by this result that I purchased a new book, called Taking Charge of Your Fertility. This book taught me that a woman is only capable of conceiving a child for four days out of every month. Four days.

When we first started trying, we thought this would be easy. We chucked our box of Trojans out the window and proceeded to engage in all the spontaneous fun we’d been dreaming of. After one month I was secretly relieved we’d failed. The stretch mark nightmares were getting worse, and I was beginning to wonder if we’d ever be able to afford electrolysis for Kris’ back if I gave up my job. After two months, I was nervous about something else entirely. What if I can’t conceive? At 37, infertility was a possibility I was trying not to think too much about. Terrified as I was of getting pregnant, I was dead afraid of failure.

Lucy never warned me that this could happen.

After four months I started to enjoy the process. It was like starring in our own personal game show- will November be the month this lucky couple wins the big prize? After five, I bought the book.

Now that I have this fertility book, I practice a number of secret rituals that will enable me to conceive, such as checking my cervical position, testing my urine, and eating Robitussen. I take my temperature every morning at 7:00, in an attempt to detect the sudden rise in temperature that is called my thermal shift. When I see my thermal shift, it generally causes me to curse and say things like,

“I told you not to eat that Kim Chee last night!”

This is because the thermal shift tells me that I’ve just ovulated, so there’s no use fooling around anymore. The golden Four Days have ended.

Thankfully, the book told me how I can determine when the Four Days are about to begin. The most important thing to watch out for is cervical fluid.

“…cervical fluid resembles raw eggwhite. It’s extremely slippery and can stretch from one to even ten inches.”

I was feeling pretty smug about not finding any cervical fluid until I read this:

“…fertile cervical fluid functions exactly like the seminal fluid. It provides an alkaline medium to protect the sperm from an otherwise acidic vagina. In addition, it provides nourishment for the sperm, acts as a filtering mechanism, and functions as a medium in which to move.”

Thankfully, “Taking Charge of Your Fertility” has some helpful suggestions for women without cervical fluid.

“Consider the use of real egg whites as lubricant if you don’t produce much fertile-quality cervical fluid.”

If you’re tempted to try using egg whites, let me give you some advice:
1.  Pick up one of those medicine droppers from your local pharmacy. Egg whites are difficult to pour.
2.  Warm the egg first.
3.  Try not to laugh. If you laugh, have a towel handy.
4.  There are lubricants you can buy which don’t kill sperm. These come in a bottle, and they won’t cause your husband to run screaming from your vagina. Consider using one of these instead.

Lucky for me, my husband isn’t the screaming type.

When I envision the high school graduations of my future children, I imagine that all of my suffering will have been blotted out by heavy drugs and hypnotherapy. I will look back on my pregnancy and see myself comically attempting to reach my unlaced shoe- bending and heaving into elephantine yoga stances- until handsome Ricky sweeps into the apartment bearing a hot fudge sundae with anchovy topping, and helps me slip cute fuzzy slippers onto my cutely swollen feet.

In retrospect, everything will be just as fun as Lucy promised it would be.

This is why I try not to worry too much about the future. Maybe I will pee myself every time I cough after the children are born. But by the time I’m 80, I’ll be convinced that everyone pees their pants, and it won’t bother me a bit. Some things, you’re better off not thinking until they’re already upon you.

Besides, I’m as prepared as anyone. I have already started saving up for the antidepressants I’ll need after this is all over, and if it doesn’t happen right away we may even have enough to buy electrolysis, liposuction, and a boob job. And I have this “Girlfriend’s Guide to Nightmares and Horror.” If I survive pregnancy, I will give this book to my daughters.

In the meantime, I have the freedom to hope for two mutually exclusive futures.
In one future, I see myself circling the park with my baby jogger or reading Goodnight Moon to Baby while waiting with my husband for our elecrolysis treatments.

In the other future, I am everyone’s favorite Auntie. A woman with a great career and a tattered passport, who never had to wear her intestines on the outside. 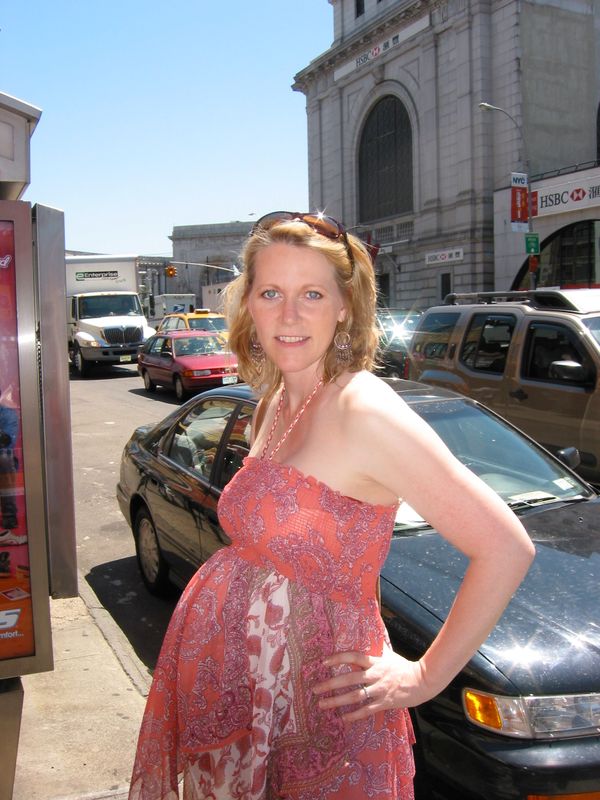 It seems so obvious now, yet shocking.

My step dad was really into Doberman Pincers. Though none of our dogs was the least bit aggressive, it was fun to walk them, because people were afraid. It was